Do you have a yawning Perception Gap, or are you in sync with the American public? Our study explores how Americans tend to have a distorted understanding of people on the other side of the aisle, what causes it, and why it matters. 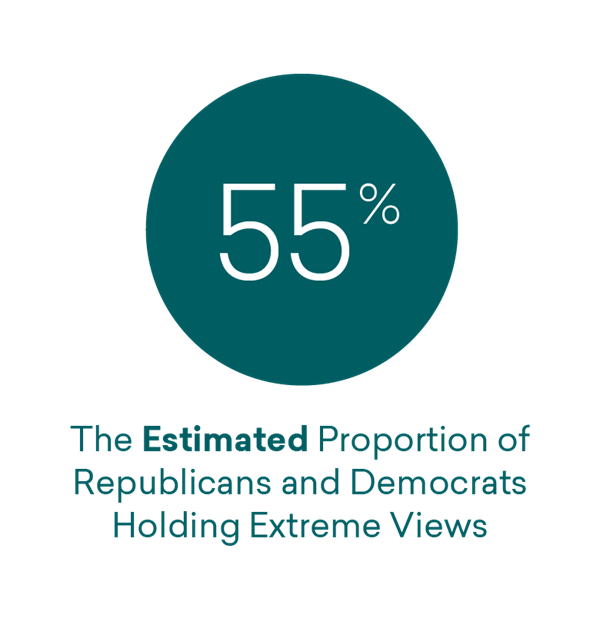 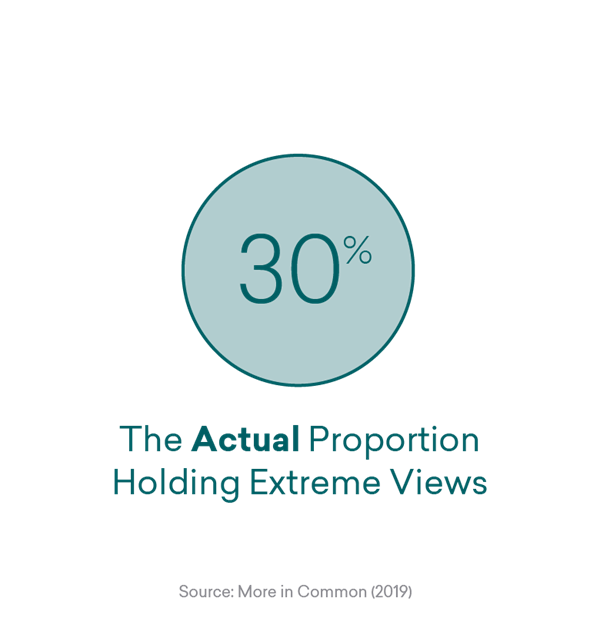 Almost two-thirds of Americans describe themselves as either Democrats or Republicans, and with every passing year each side seems to dislike the other more and more. We trust each other less, we fear each other more, and we struggle to understand how those on the other side of the political fence could possibly hold so many wrong-headed views.

But with today’s personalized social media feeds and our tendency to live in bubbles of like-minded friends, are we getting each other wrong?  As part of its ongoing investigation into the root causes of political polarization, More in Common wanted to find out whether Republicans and Democrats could separate perception from reality.

To learn how well Americans understand each other, we partnered with global research firm YouGov to survey 2,100 Americans. On issues including climate change, patriotism, sexual assault, police conduct and more, we asked Americans what they themselves believed and what they estimated people on the other side believed. We were then able to calculate the difference between the predictions and reality.

The conclusion? Americans have a deeply distorted understanding of each other. We call this America’s “Perception Gap”. Overall, Democrats and Republicans imagine almost twice as many of their political opponents as reality hold views they consider “extreme”. Even on the most controversial issues in our national debates, Americans are less divided than most of us think. This is good news for those worried about the character of this country. The majority of Americans hold views that may not be so different from your own. 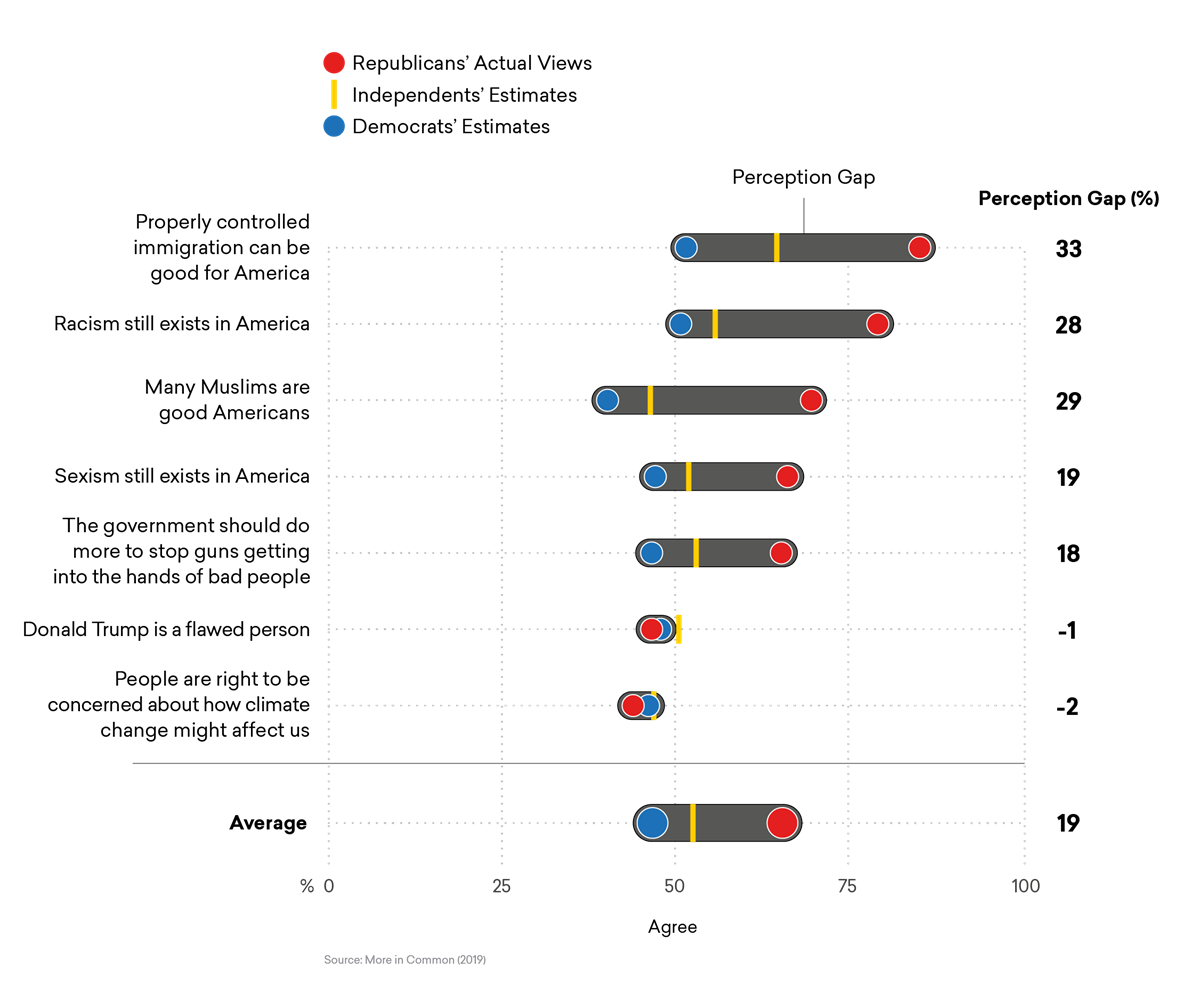 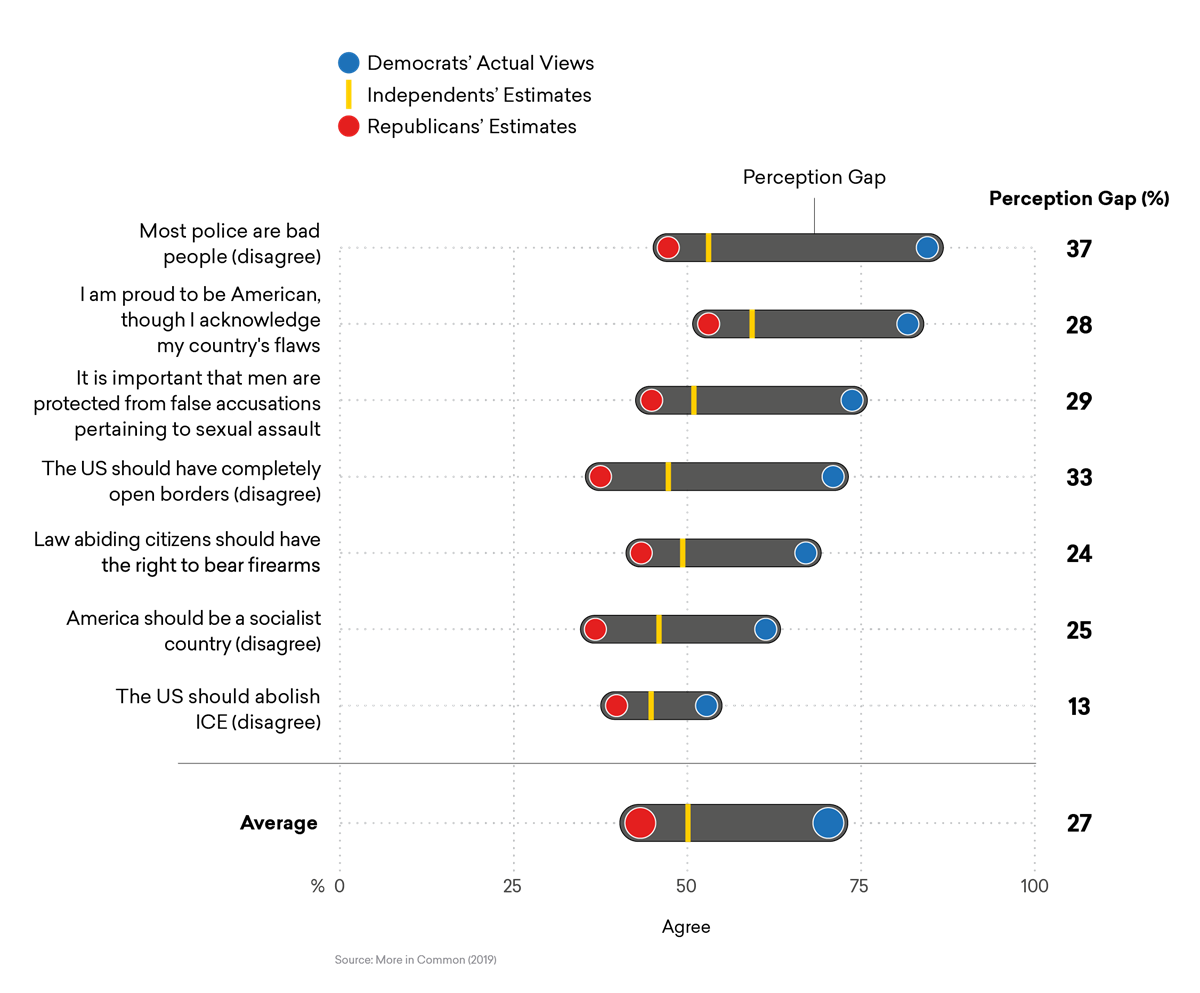 So who has the largest Perception Gap? What factors might explain why one person has more distorted perceptions than another? Does this actually make us more hostile to each other, and what can we do about it? These are the questions we sought to answer.

In one of the largest national studies of America’s polarization ever conducted, More in Common’s Hidden Tribes report identified seven political “tribes”:

The Hidden Tribes of America 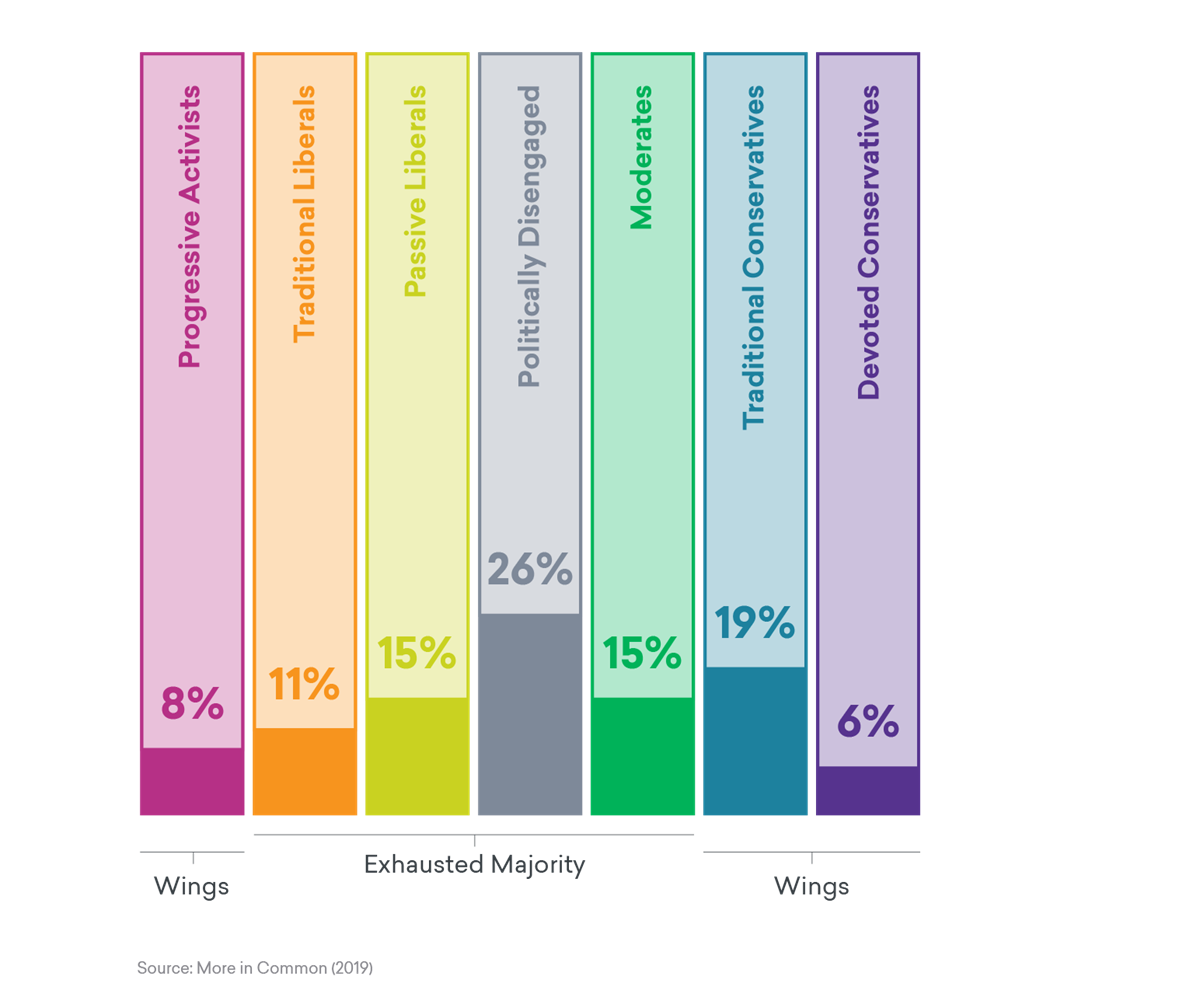 The Perception Gap study builds on these insights. It finds that the most partisan, politically active Americans – a group we call the “Wings” – have deeply distorted perceptions of the other side. The two groups with the widest Perception Gaps are the Progressive Activists and the Devoted Conservatives—the most ideological and committed groups of Democrats and Republicans.

And which is the most accurate segment? Surprisingly, it’s the Politically Disengaged. They are fully three times more accurate in their estimates of political opponents than members of either of these Wing groups. The V-shaped Perception Gap shows that the less invested you are in politics today, the less distorted your perception of politics. 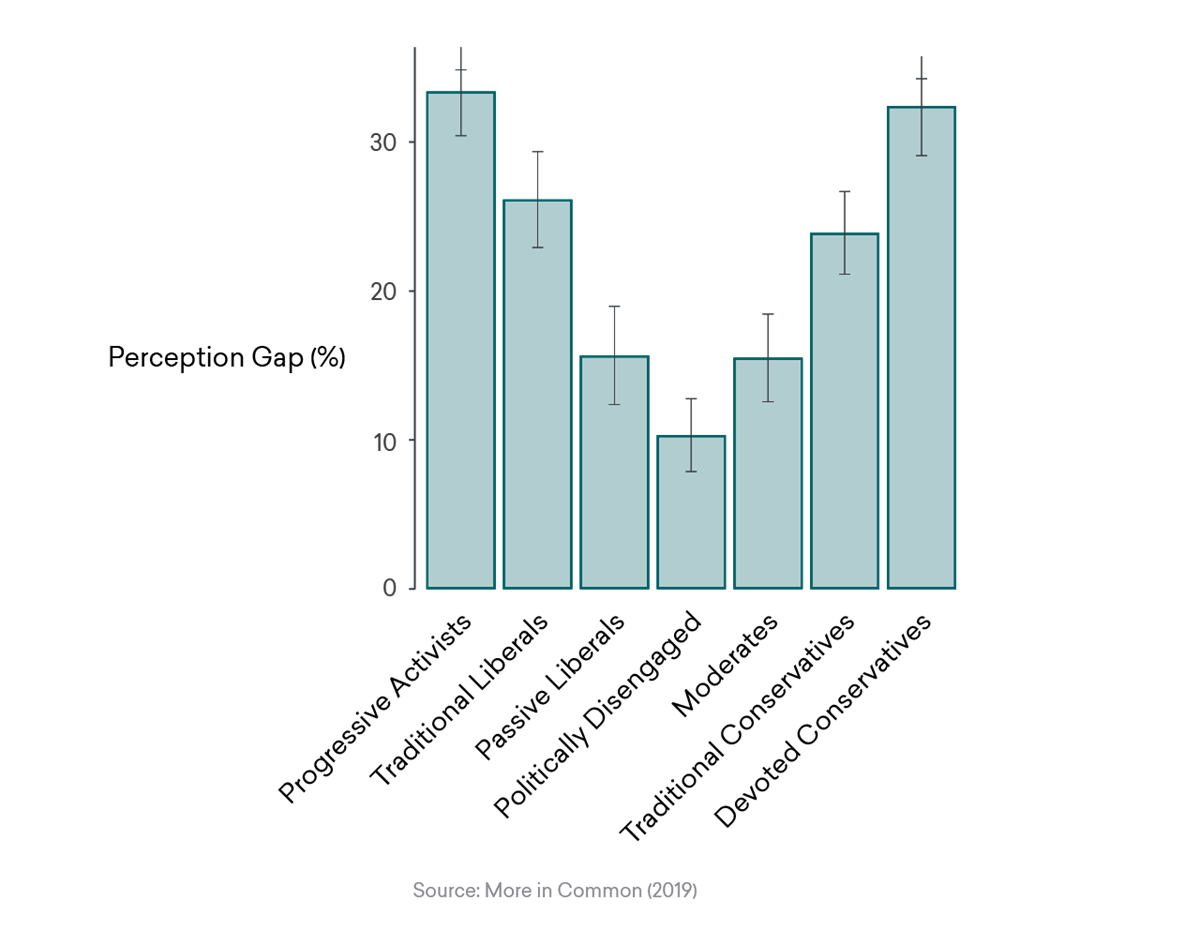 You might think that people who regularly read the news are more informed about their political opponents. In fact, the opposite is the case. We found that the more news people consumed, the larger their Perception Gap. People who said they read the news “most of the time” were nearly three times more distorted in their perceptions than those who said they read the news “only now and then.” We can’t prove that one causes the other, but these results suggest that rather than making Americans better informed, media coverage is now feeding our misperceptions. 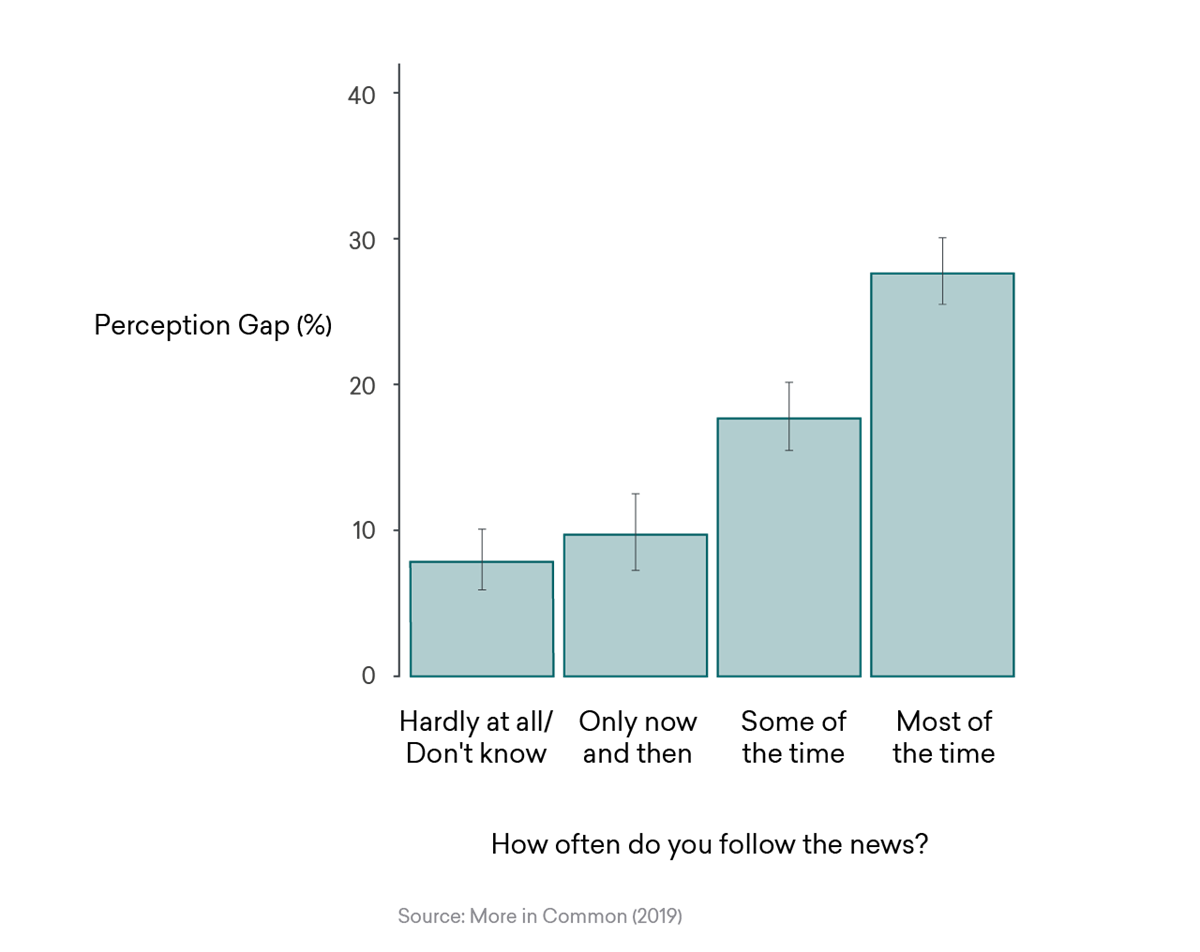 But not every media outlet is the same. We identified how specific news sources are associated with varying levels of distorted understanding in their audiences. Some news sources are associated with larger Perception Gaps, in particular Breitbart, Drudge Report and popular talk radio programs such as Sean Hannity and Rush Limbaugh. But large Perception Gaps are also associated with liberal sources such as Huffington Post and the Daily Kos. Only one media source is associated with better understanding other Americans’ views: the traditional television networks of ABC, NBC and CBS. Overall, these findings suggest that media is adding to a polarization ecosystem that is driving Americans apart.

Media and the Widening Perception Gap 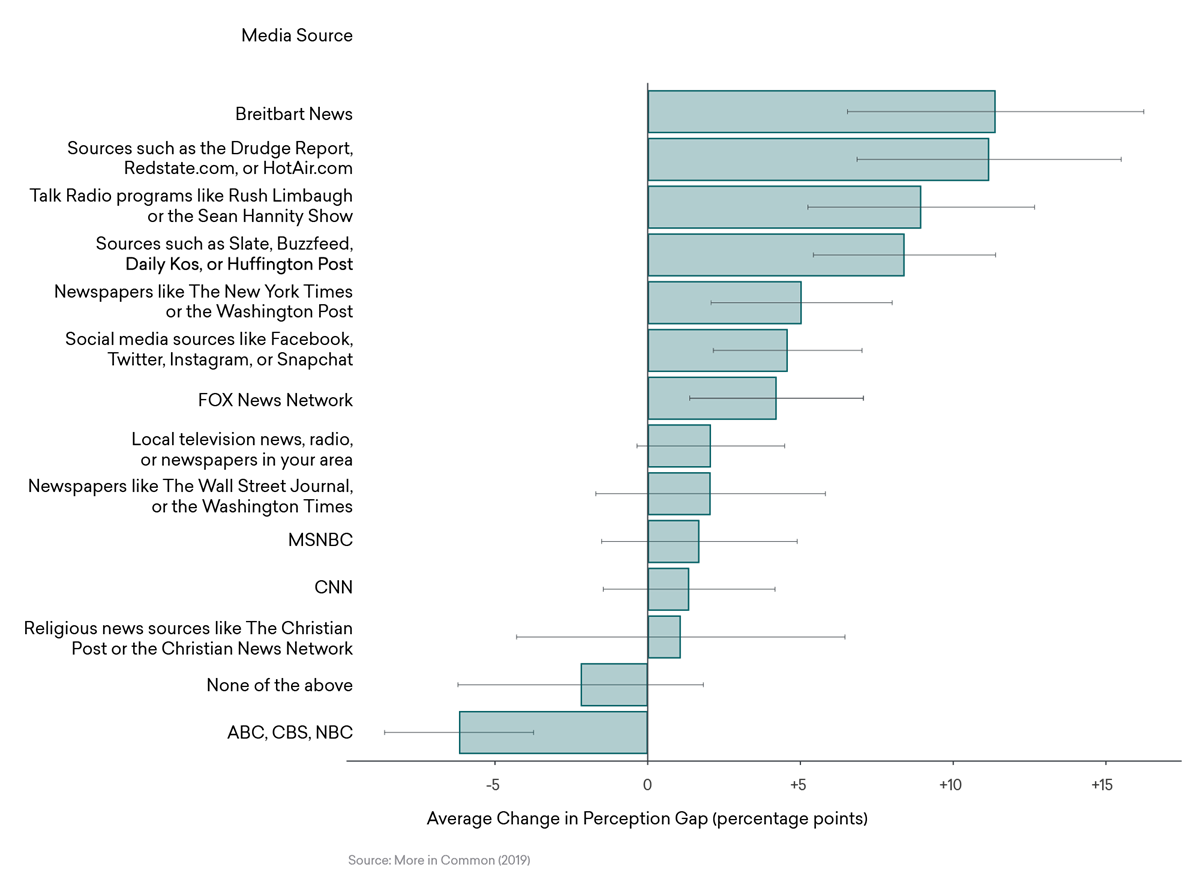 Education is intended to make us better informed about the world, so we’d expect that the more educated you become, the more you understand what other Americans think. In fact, the more educated a person is, the worse their Perception Gap – with one critical exception. This trend only holds true for Democrats, not Republicans. In other words, while Republicans’ misperceptions of Democrats do not improve with higher levels of education, Democrats’ understanding of Republicans actually gets worse with every additional degree they earn. This effect is so strong that Democrats without a high school diploma are three times more accurate than those with a postgraduate degree.

Education and the Perception Gap 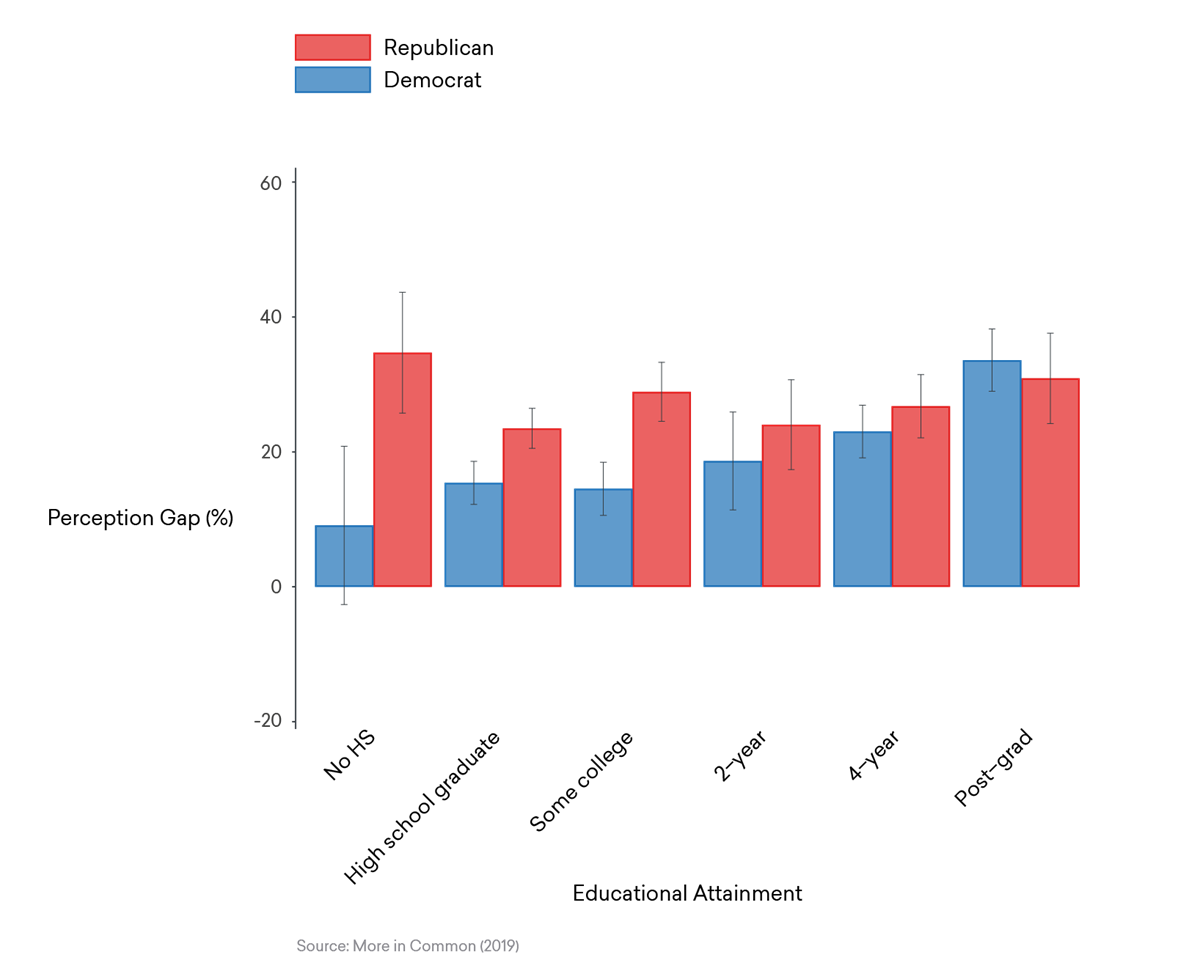 Why do Democrats, as they become more educated, have a wider Perception Gap? The evidence suggests that it’s likely because they have fewer Republican friends. Highly educated Democrats are the most likely to say that “most of my friends” share their political beliefs. The same is not true of Republicans – more educated Republicans report having about as many Democrat friends as less educated Republicans. And Democrats whose friends are similar to them politically have a significantly wider Perception Gap than those with more political diversity in their friendship groups. 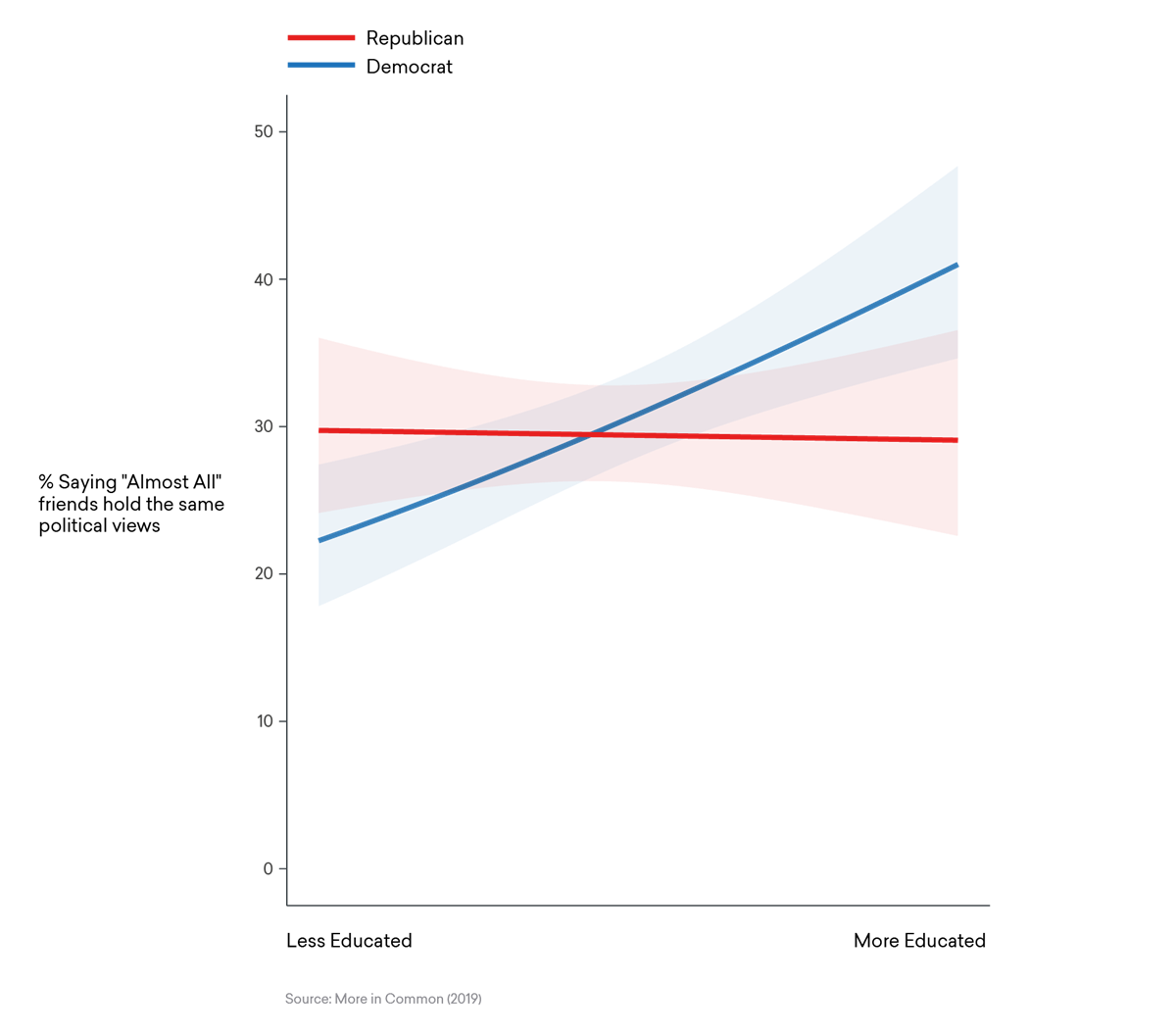 Social media platforms provide us a personalized way to receive news and commentary from anyone and everyone with whom we are connected. In theory, this could mean that users see a cross section of their community's political views, representing the full range of perspectives within their network. Unfortunately, our study's findings paint a less encouraging picture. First, only 26% of American report sharing social media posts about politics. Second, these Americans have higher Perception Gaps than the national average. While those who do not post on social media have an average Perception Gap of 18, those who do post on social media have an average Perception Gap of 29. The political content we see on social media is therefore disproportionately from people with a more distorted understanding of the other side, further adding to the problem. 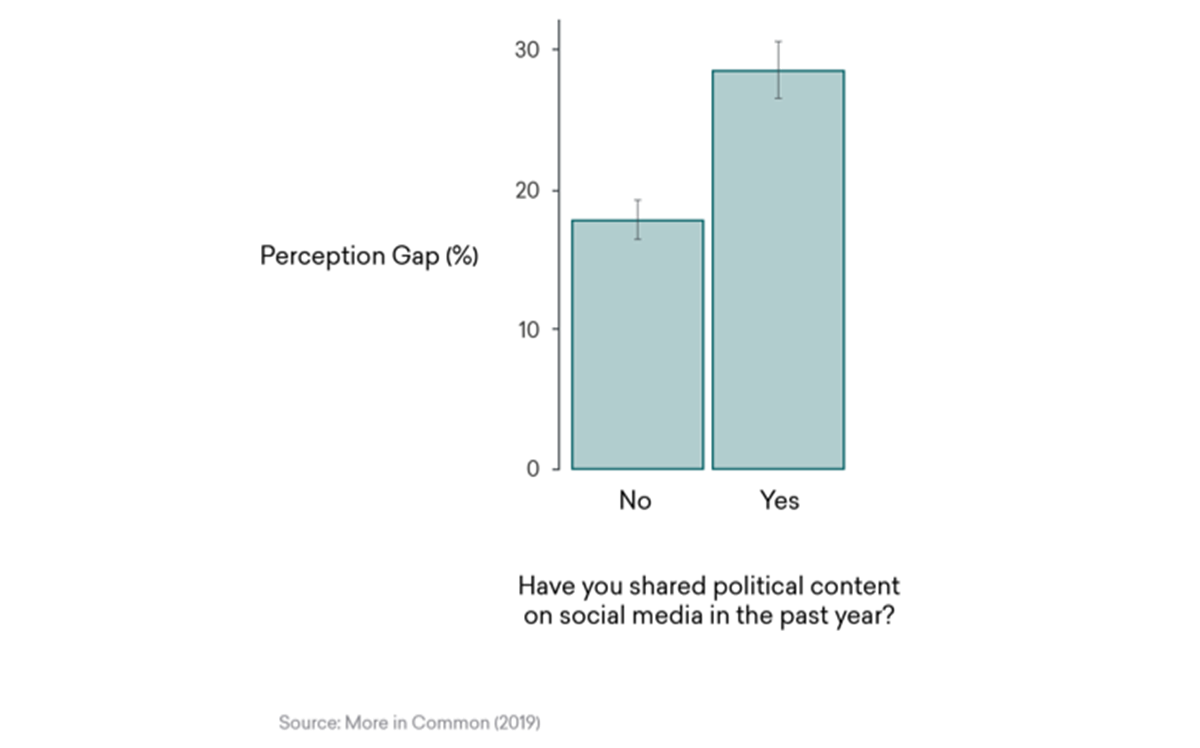 These findings matter because when people wrongly perceive others as extreme, they become more hostile towards them. The larger a person’s Perception Gap, the more negative their views are of the other side. People with large Perception Gaps are more likely to describe their opponents as “hateful,” “ignorant,” and “bigoted.” This points to the vicious cycle of polarization: the Americans who are most engaged in political issues and debates spend the most time reading, watching and listening to media that portrays the other side as extreme, further increasing their hostility and distrust and widening their Perception Gap. 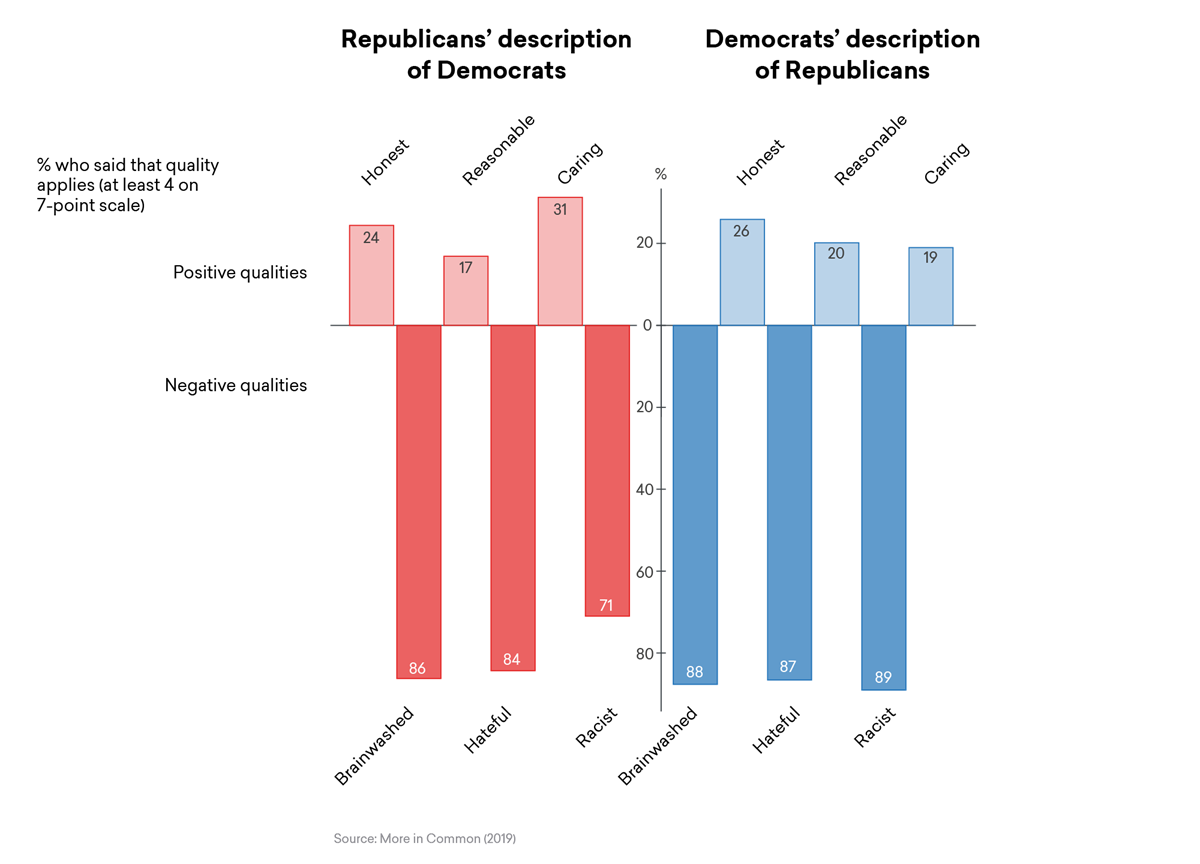 Conclusion: Why the Perception Gap Matters

More than three quarters of Americans believe our differences are not so great that we cannot come together. Yet someone scrolling through a social media news feed, or switching on cable TV or talk radio could be convinced that we’re a country heading towards civil war. This study shows that an important source of this polarization is the false beliefs people have of their political opponents. The proportion of people who share similar views about many of our most hotly debated issues is greater than most Americans realize. While Americans do indeed hold different values and disagree on key issues, we underestimate how much more we have in common.

Why does this matter? Because when Democrats and Republicans believe their opponents hold extreme views, they become more threatened by each other. They start seeing each other as enemies, and start believing they need to win at all costs. They make excuses for their own side cheating and breaking the rules to beat the other side. And as our public debates become more hateful, many in the Exhausted Majority tune out altogether. This is how countries fall into a cycle of deepening polarization, and how democracies die.

Each of us can play a role in bridging the Perception Gap. We can choose a wider range of news sources to better understand different perspectives. We can refuse to be manipulated into outrage by reducing our exposure to social media feeds that amplify the views of the partisan Wings, rather than the Exhausted Majority. And finally, we can seek to build connections with people who think differently from us. Directly engaging with people whose experiences and views differ from our own makes it harder for us to see them as the enemy.

But individual action will likely not be enough. Civility alone will not resolve our disagreements or overcome the deep challenges that we need to address. That is because our analysis reveals a powerful polarization ecosystem that thrives off of outrage and division. Traditional media, social media platforms, friend networks, political candidates and consultants benefit from dividing Americans, exaggerating disagreements and inciting conflict. These forces of division must be held to account. In their place, we need to galvanize a larger ecosystem of local and national solutions that can bring us together and address the causes of our division.

A healthy democracy will always have some disagreement and conflict; it’s a necessary component of progress. But democracy also requires a sense of shared values and commitments, and a willingness to find common ground. This study suggests that there is more such territory than many imagine. By understanding our Perception Gaps, working to overcome our mistrust of the other side, and resisting the forces that seek to divide us, we can advance towards a future that we all want.